Bears are some of the most magnificent creatures to see -- as long as you're appropriately far away, of course.

When you're backpacking or hiking in an area inhabited by black bears or grizzlies, it's important to have protection on hand. This is especially true if you're averse to using guns or simply cannot carry where you're going.

For a great line of defense, there is bear spray. We rounded up a few of the best sprays on the market and ranked them. 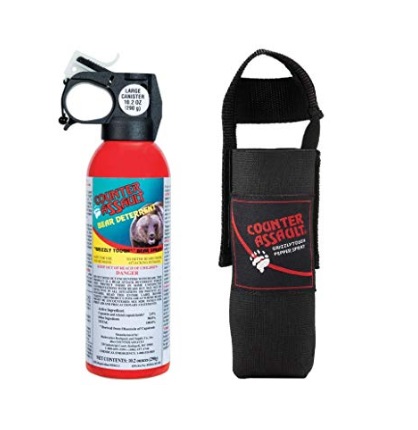 It's certainly not hard to find Counter Assault bear spray out in the wild. If nothing else, their marketing team is definitely doing its job!

As for the product itself, we think this spray is the best on the market. Its formula relies on the active ingredient capsaicin (and related capsaicinoids), just like other bear sprays, and it can reach as far as 32 feet for 9.2 seconds. Compared to other products, this one definitely stands out from the pack for these records.

Along with the 8.1 oz (230 g) canister, you'll get a nylon holster with the product. In fact, this holster played a factor in our preference for Counter Assault over Frontiersman. That said, the holster's durability is questionable and  - but that may not be a big deal since, if you use it (which we hope you never have to) you'll get a new one next time you re-order. 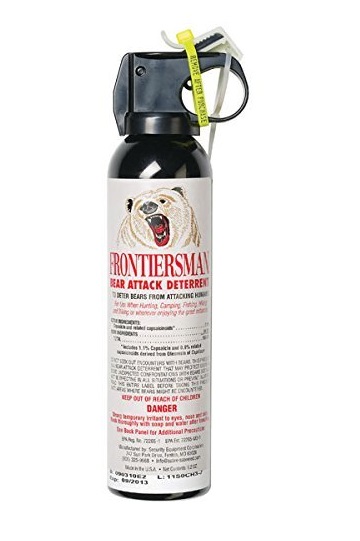 If a bear has already decided to attack, bear spray is the most effective method you can use to stop it in its tracks.

Why? Capsaicin, the active component of chili peppers, is found in high concentration in bear spray. You'll also find it in the formula for pepper spray.

The main reason we didn't like Frontiersman as much as Counter Assault was has nothing to do with the amount of capsaicin found in the formula; the EPA sets manufacturer limits, so you will generally find the same amount in each product.

We did love that it can reach up to 35 feet in a single spray. Compare that to other sprays that usually spray no more than 12 to 32 feet. Bears aren't small but they are fast, and every inch of spray distance matters for survival.

Unfortunately, the Frontiersman spray doesn't automatically come with a belt holster. That's really the only reason we don't have it share the #1 spot. But, you do have the option of buying a belt holster separately, and this gives you the ability to immediately access and use your spray in the heat of the moment. In fact, you can even use the canister without removing it from your holster.

You can buy the spray in two different sizes: 7.9 ounces or 9.2 ounces. The smaller can sprays up to 30 feet, and the larger can gets the full 35 feet. 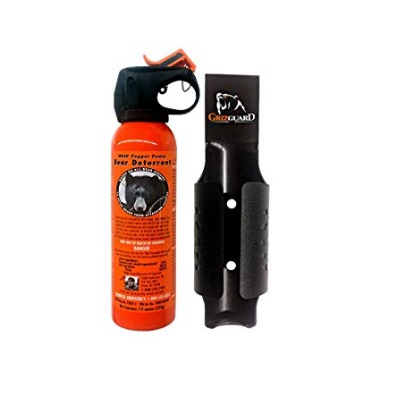 You might not think bear spray is one of those things that could be customized, but Udap has set out to prove everyone wrong on that. They produce one of the only customizable sprays on the market.

Although the company claims it is the most trusted brand for bear deterrence, visiting the website doesn't really provide much information about the product. It seems like a bit of an oversight for a brand that wants to believe we all trust it. Regardless, we do know it will spray a respectable 30 feet, according to users who have purchased the product.

It also comes with an accessible plastic snap holster that has great design elements compared to other holsters. Unfortunately, the plastic holder is somewhat open and thus prone to accidental firing. Snap pressure is the only thing that holds the canister in place. 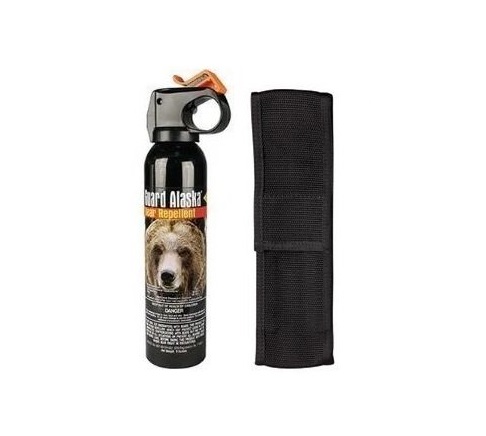 Although we've yet to see the Guard Alaska brand out in the stores, it comes with plenty of positive reviews online.

Perhaps the best part is the fact that the company posts a four-year shelf life for the nine-ounce canister. Buying bear spray isn't a cheap endeavor, so it's always great to find products that will last for a long time between trips. There's nothing worse than believing your spray is still good right up until an attack when the bottle fails to deploy.

Armed with Guard Alaska repellent, you'll have little trouble spraying capsaicin for nearly ten seconds in a single burst. Compared to other brands, this is a great duration that ranks it runner-up overall. Compared to the size of cans in ounces, though, this spray outperforms the rest.

Buying this brand will get you access to a free belt clip and holster, but we'd recommend modifying it so it stays on tighter. 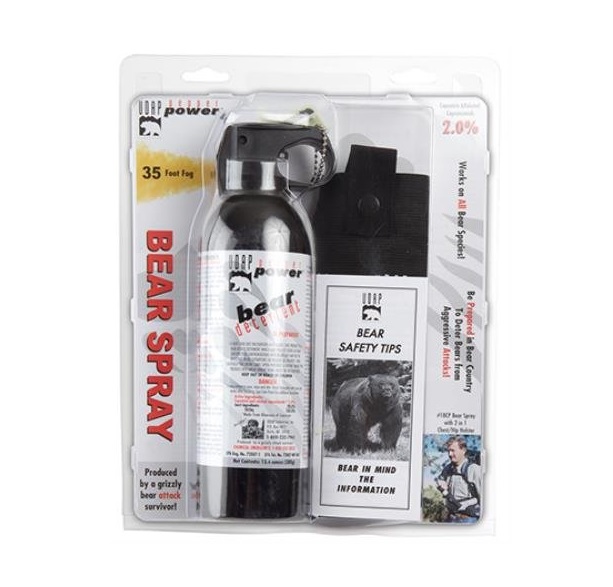 It too comes with a 2.0 percent concentration of capsaicinoid strength, making it another one of the strongest sprays available on the market. Not only that, but it has the means to deliver a rather dense fog to help add another line of defense against bears up to 35 feet away. Of course, this bigger canister means it's more expensive and runs out in just 7 seconds.

Although its users seem to love the product when needed against real bears in the wild, there's a serious problem with its core design. The trigger doesn't allow you to burst-fire with ease because you have to manually depress the trigger again to stop the spray once you've started. Forget trying to pull that off in a real-world encounter.

With this in mind, this repellent is definitely more of a one-shot emergency deal. Considering how expensive the spray is, that's a bit of a turn-off.

To recap, here's our list for top bear sprays on the market:

The Counter Assault bear spray is easily our favorite deterrent thanks to its long spraying range and maximum strength capsaicin. We prefer it over other products because it has a long 9.2-second spray time, which gives it the time needed to make a big fog cloud. The cloud serves as an additional line of defense so you can get away.

There is even documented proof of having successfully relied on this spray to get away from a real bear in the wild. A can of Counter Assault was used to save a couple in Alaska from a sow grizzly attack. What better way to prove it's the real deal?

How Does Bear Spray Work?

The exact formula for bear spray varies between companies, but the core active ingredient is the same: capsaicin extracted from very hot peppers. This substance burns bears' noses and eyes if they walk into a mist cloud produced by the canister.

Most sprays work from 18 to 30 feet away, and some can even spray farther. Manufacturers generally say their products are most effective at half the max possible distance. When it rains, then the effective distance is even shorter, which can put the bear pretty close for comfort.

Can You Use Bear Spray Against Other Predators?

Fire off that canister of spray and you'll create a hot pepper cloud 25 feet long that stops bears from continuing their attack. It's not a lethal substance, but it does irritate the bear's lungs and eyes long enough that it'll choose to leave instead.

Despite the name, the bear deterrent works against other vicious predators as well. As long as the target has lungs and eyes, it'll irritate both well enough. That means you'll also have protection against moose, wild pigs, and mountain lions.

Is Bear Deterrent Spray the Same as Pepper Spray for Self Defense?

Though they're both made using very hot peppers, bear spray isn't the same thing as pepper spray. The bear deterrent contains a lower concentration of capsaicin compared to pepper spray.

Whereas the maximum concentration of the active ingredient is only 2.0 percent for bears, pepper spray for self-defense contains a concentration strength of 10 percent or greater. After all, the goal is to scare the bear, not incapacitate or cause serious pain. With that in mind, there is no reason to use a lot of the chemical, and we absolutely don't recommend using pepper spray on a bear.

What is Typically in Bear Spray?

All bear deterrent sprays begin with oleoresin of capsicum from very hot peppers. It's a waxlike extract that is also found in spicy foods like Tabasco sauce and certain brains of chili.

Undiluted, the pepper registers 3.6 million on the Scoville heat unit scale. Compare that to habanero peppers which only hit as high as 200,000. It's so potent that the EPA limits the concentration strength to 2.0 percent in a spray.

Most people would assume that bear spray is the stronger one compared to pepper spray. After all, bears are much larger than humans and can injure or maim much more easily.

It turns out this is not true, though. Both sprays have the same chemical but they're not the same thing; bear deterrent contains much less of the active chemical in them and shouldn't be used for self-defense against humans.

These products are also meant to create wide clouds to discourage bear attacks. Compare that to pepper spray, which is meant to target a stream directly into the eyes of a human attacker in your immediate sphere.

This stuff really works, but, at the same time, you shouldn't bet your life on it.

That means don't assume that a spray of the canister is all you'll need to escape the situation. It helps, of course, to avoid getting into the situation in the first place.

Study the best ways to store your food to protect it from bears, and learn how to recognize when a bear has been active in the area. You'll also want to know how to ward off different types of bears and learn how to avoid surprising them by accident.

Of course, some encounters are inevitable but just as dangerous, and this is where the deterrent comes in. Surprisingly, the spray is more effective than firearms at stopping bear attacks, which gives you yet another reason to equip yourself with a spray.

Is Bear Spray Harmful to Humans?

The spray irritates the eyes and lungs of any mammal that comes in contact with it. Even though it's not as strong as pepper spray, bear deterrents can contaminate humans and cause swelling and irritation. Affected people close their eyes and tear involuntarily, and they'll likely cough profusely.

If the symptoms last more than 20 minutes, seek medical help.

How Effective is Bear Spray?

Although gun proponents continue to claim that their method is better against a charging bear, the science says otherwise. Used properly, the spray is much more effective at stopping an attack.

This interesting article by the US Fish & Wildlife Service provides some excellent data on this topic.

Can I Fly With Bear Spray?

Bear spray is extremely flammable, and U.S. federal law prohibits carrying a chemical weapon in your checked or carry-on luggage. We recommend buying any spray you need after arriving at your destination and discarding whatever is left before you leave.

Shop Survival Frog for a Huge Variety of Products!

Have you Checked out the SunJack? One of the Coolest Solar Powered Chargers Ever!

Hello and Welcome to TruthSurvival.com! Note that if you click on a referral link and make a purchase, we may be compensated with a commission. Regardless, we only refer readers to merchants that we feel offer good value and quality. And you will never pay more for your purchases as a result of using our links. The merchant pays the commissions – not you :). Learn More Here.