Home » Earthquakes » How to Prepare for a Tsunami
EarthquakesNatural DisastersTsunamis

How to Prepare for a Tsunami

Massive disturbances in the ocean can cause a series of deadly waves to slam against a coast. This is basically what a tsunami is. When these disturbances happen in the middle of the ocean, they’re not particularly threatening. It’s only when tsunamis reach the shore that they become so deadly. If you live in a coastal area, especially one that’s already experienced a tsunami, the following article is for you. I’m going to show you how to prepare for a tsunami so that you can increase your chances of survival. Let’s get started.

If you live in a coastal community, chances are good that you have an evacuation route. Even if it’s not actively talked about, it most likely exists. An evacuation route will provide you with the quickest way to reach high ground in the event that a tsunami hits. As a general rule, you’ll want to be at least 2 miles away from shore, as well as 100 feet above sea level. If you’re visiting a coastal community as a tourist, ask your hotel about evacuation routes. If they can’t help you, familiarize yourself with the area. That way you won’t have to “think” when a tsunami hits- you can just act. That’s one of the biggest tips to remember when learning how to prepare for a tsunami.

As the old saying goes, “It’s better to have something and not need it, than need it and not have it”. Even if you never experience a tsunami in your lifetime, it’s still in your best interest to practice evacuation routes. Practicing will tell you how long it will take to reach your safety spot. It will also show you alternate routes in the event that your route is jammed or impassable. You can’t fully learn how to prepare for a tsunami without practicing your evacuation routes.

Build three separate emergency kits- one for your car, one for your home, and one for work. You want to have one available no matter where you are (a survival kit does you no good if you can’t get to it). As a general rule of thumb, I would advise packing your kit with a minimum of 72 hours’ worth of goods. Here’s a list to help you get started:

These are just the basics. For more information on how to build an awesome emergency kit, check out my article, How to Build the Best Bug Out Bag. Once you’ve built your emergency kits, place them in the areas mention above (work, home, and car). That way, no matter where you are during a tsunami, you’ll be able to access your kit. This is probably the most important tip to keep in mind when learning how to prepare for a tsunami.

Create a Point to Meet Up

Let’s play out a mini scenario. Let’s pretend that you’re at work, the children are at school, and your spouse is at home. All of a sudden, a tsunami hits. How do you respond? It’s not an easy position to be in, especially if you and your family don’t have a pre-determined meeting location. It’s recommended that you and your family come up with a location where you’ll meet in the event that a tsunami does hit. Granted, this applies mainly if you’ve lost cell phone service and/or internet. It’s also recommended to invest in a set of walkie talkies. That way, even if the cell phone towers get destroyed, you’ll still have a relatively reliable way to communicate with your family. Finally, talk to your children’s school about their tsunami policy and familiarize yourself with it.

When learning how to prepare for a tsunami, the best thing you can do is recognize the warning signs. First of all, know that earthquakes often precede tsunamis (this is what happened in the 2011 earthquakes that hit Japan). If you experience an earthquake, even a minor one, a tsunami could follow if you live in a coastal area. In some cases, the tsunami can hit as quickly as a few minutes later, so you’ll need to be prepared.

Remember, tsunamis have the ability to travel long distances. An earthquake that happens in Alaska could possibly cause a tsunami in Hawaii. Fortunately, tsunamis lose energy as they travel, so they rarely gain enough momentum to strike the coastline. Another way to recognize the warning signs is to look out to sea. If you notice the water receding very far back, this is a telltale sign that a tsunami is about to strike, and that you should evacuate to higher ground immediately. Here’s a video that illustrates what it will look like:

Warn Others And Get to Safety

If you notice the warning signs of a tsunami, warn others and immediately head to safety. Do whatever you need to do to grab the attention of people on the beach (screaming, yelling, etc.). Note, it’s possible for tsunamis to consist of more than one wave. Each wave can be separated by a short or long period of time. So, even if the first wave isn’t very aggressive (or large), this doesn’t mean that the second, third, or fourth will be just as weak. They may be stronger than the previous one.  When learning how to prepare for a tsunami, don’t be skeptical. If it looks like the warning signs of a tsunami, and you can feel it in your gut, then warn others and immediately take you and your family to safety.

Immediately follow the evacuation plan laid out by you and your family. Depending on the tsunami, you may need to adjust your plan and go even further/higher away from shore. The initial wave can sweep as much as 2,000 feet into the coast. That’s very far, and you definitely don’t want to be around when that happens. If you’re a tourist and don’t know the area, just go. Follow the crowd and make your way to higher ground as quickly and safely as possible. Even if you’re on foot, just run. The further away you are from shore, the higher your chances of survival.

As a general rule of thumb, I would advise finding “natural” higher ground (like a hill or mountain). Why? Because small buildings may crumble due to the force of the tsunami’s waves. You may be thinking, “There’s no way tsunamis are powerful enough to knock down buildings!” I thought so too, until I saw the following picture: 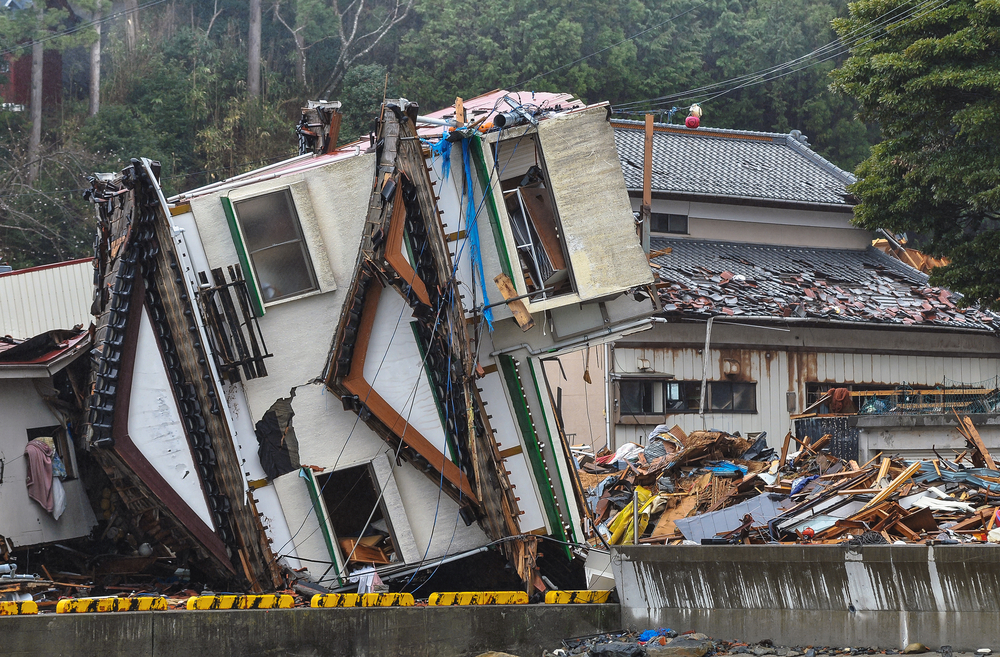 As you can see, a multi-story building lies on its side after the March 11th, 2011 tsunami that hit Japan. For the longest time, experts recommended getting inside concrete buildings during a tsunami. But as it turns out, even this can make you vulnerable. Granted, if there’s nowhere else to go and you’ve got seconds to react, go inside a building. However, if you have time to fully prepare and evacuate, choose natural higher ground instead- mountains, hills, etc. This is a super-important tip to remember when learning how to prepare for a tsunami. Other experts say that if you are running inland, go at least a mile.

If you’re already out at sea, go further out. You’ll be much more protected the further out at sea you are (since the tsunami will be far below the surface). Additionally, trying to make your way inland and dock is extremely dangerous, and may get you killed. The people who act the quickest during a tsunami are usually the ones who live. Don’t just stand there with a look of terror on your face. Get up and get moving! The following video, presented by PHE.gov (Public Health Emergency information, U.S. Department of Health and Human Services) offers additional recommendations.

If You’re Caught in the Current

I’m a firm believer that you should never give up hope- even when your chances of survival are slim. Although few people get caught in tsunami waves and live to tell about it, this doesn’t mean you should wave your white flag.

If you get caught in a current, don’t fight it, because you’ll drown. Instead, go with the flow. Remember that debris (cars, trees, etc.) will be in the water with you. Try to grab a piece of debris and hold on to it. If you can’t grab it, then try to avoid it. Again, people have survived getting caught in tsunami currents. It will depend largely on luck, but being aware and making smart decisions should increase your chances of survival.

How to Prepare for a Tsunami – Bottom Line

When learning how to prepare for a tsunami, always have an emergency kit prepared. That’s my biggest takeaway for this article. Even if you survive the initial wave, you may not have access to power or clean water for weeks. That’s where a properly packed emergency kit can save your life. If you live in a coastal area, especially one that’s already experienced a tsunami, then you need to be extra prepared. Knowing how to prepare for a tsunami really boils down to common sense and proper planning, and if you follow the tips in this article, you should make it out alive.

NOTE: This article was originally published by David, on March 19, 2016 under the categories of Natural Disasters, and Tsunamis. Updated videos loaded May 2019.

How to Build an Underground Shelter

How to Prepare for a Winter Storm