When you’re in a survival situation, water can be hard to come by. That’s because you simply can’t walk up to a pond or stream and start drinking. This will most likely make you sick. You need to filter and purify the water before you can drink it. Fortunately, there’s a product that will help you do just that- and it’s called the LifeStraw. It’s one of the most convenient, least expensive water treatment systems that you can buy. In this review, I’ll show you why you definitely need to invest in it, as well as show you where you can buy it. Let’s get started.

One of the Best Overall

Let's get the obvious bits right up front: The LifeStraw is by far one of the best personal water filters that you can buy today for emergency use for the money. Weighing only about 2 ounces, it's perfect for hikers, preppers, and international travelers. It has the ability to filter about 1,000 liters of water, while removing up to 99.999% of microorganisms. This means that you can drink from just about any water source without worrying about getting sick.

One of Time Magazine's "Most Amazing Inventions of 2005"

This may not be the Nobel Prize or anything, but it's still pretty sweet that the LifeStraw won recognition as one of Time Magazine's "Most Amazing Inventions of 2005."  What's important to note - beyond any hype - is that as the NY Times noted a few years back, the forward-thinking Swiss inventors, Vestergaard Frandsen, created this personal device (which is only one of several different models) for people who REALLY don't have good water to drink. I mean, ok - at our site here, we talk about emergency preparedness and such, but as you're aware, there are millions of people who live in crisis every.single.day. These are the people who flat out do not have drinkable, potable water. So, when this bad boy hit the market in 2011, it was for these folks that it was initially intended.

Let's begin by showing you a basic overview of how it works. To begin, this unique little item costs only about $25. As you can see from the picture, it’s basically a compact, straw-like device that will allow you to drink from any water source without worrying about getting sick. It doesn’t require batteries or chemicals to filter water, and doesn’t have any moving parts either.

The company says that it can filter about 1,000 liters of water before needing to be replaced. That's pretty impressive! The LifeStraw has the ability to filter out microorganism, dirt, and other foreign debris that could potentially make you sick. Let me also say that it weighs a mere 2 ounces. And as gross as it sounds, you can even drink from toilets. Take a look at the popular Vat19 YouTube "LifeStraw Challenge" video. (Editor's Note: As of this update in February 2021 I confess that this actually still makes me gag a little bit, but it's effective - we have a video of a bit more "realistic" scenario below):

What did you think of that? LOL! I think that they get the point across fairly well in that video!

Anytime that you need to make dirty water drinkable, the LifeStraw can be used. Keep in mind that it filters out anything larger 0.2 microns. Because of this, it filters out 99.99% of impurities- all from a lightweight, easy-to-use tool that costs $25. In short, it’s a must-have for any survival kit. Let’s continue talking about some common applications:

For basically any outdoor activity, this is the way to go. I hate to sound like a broken record, but its convenience and ease-of-use is really where it stands out the most. I’m actually really surprised by how low-priced this outdoor tool is.

This video shows the LifeStraw in a little bit more realistic situation:

Ok, now let's talk about each of its core features in more detail.

Let’s spend this part of the article talking about its size. While the LifeStraw is small, it isn’t that small- at least not compared to some competing filtering straws on the market. Still, I’ve never found size to be an issue. It’s about eight inches in length, which is hardly anything.

When building the best bug out bag you can, I highly recommend adding it in there. Heck, add a few of them just for good measure. Due to its small size, you can easily fit one in your pocket, which is a plus. They’re also small enough to fit in almost any vehicle compartment.

Another thing that you’ll love is that it comes with a built-in lanyard. This will allow you to easily carry it around. This may sound like a minor benefit, but in actuality, it makes it that much more portable. Both ends of the water filter are covered by caps, ensuring that you don’t get any dirt or foreign debris in the sipping area.

I should mention that having a protection cover is another huge benefit that most people never think about. Without a protective cover, it makes cross-contamination more likely. Similar models on the market offer neither a lanyard nor a protective cover, which can render them a bit less reliable.

Let's talk about filter use. As mentioned earlier, this cool little gadget doesn’t contain any moving parts, special pumps, or chemicals. The straw’s specialized filter makes it possible to drink from literally any water source. Simply insert the larger end of the straw into the water source, place your lips on the smaller side, and begin sucking.

It may take a few seconds for the water to actually reach your mouth (since it must pass through the filter first). Also important is the fact that the drawing side and sucking side are highly distinguishable from one another. This ensures that you don’t accidentally place your mouth on the wrong side. As you can image, drinking from the wrong side of the water filter can make you sick, which is the last thing you want in a survival situation. Once you’re finished drinking, blow through the straw to remove any left behind water. Then replace the cap and go about what you were doing. 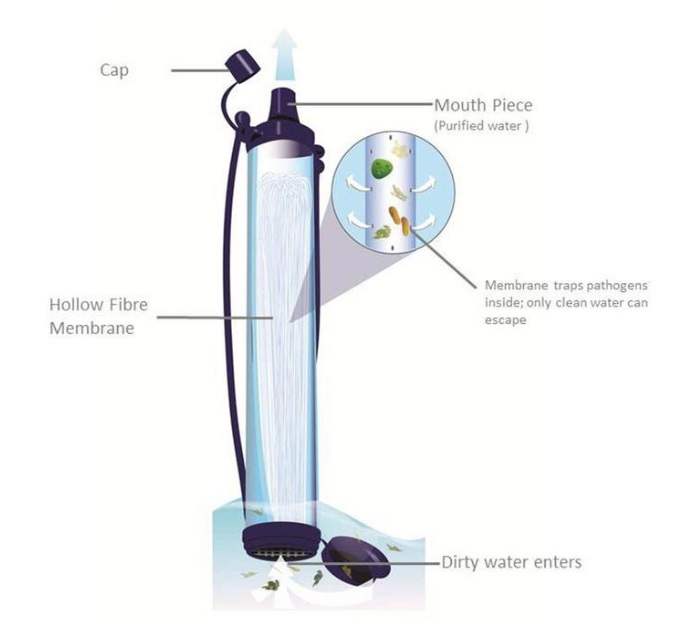 Clicking the image above will bring you directly to the product page at SurvivalFrog, where you'll see over 330 positive, verified buyer reviews. And they are all good. So, see it for yourself.

We need to look further at the filter itself, because this is where the “magic” happens. With the capacity to filter up to 1,000 liters of water (264 gallons), I think it's safe to say that the $20 or so (here at SurvivalFrog.com) that you'll spend on the LifeStraw is more than worth it. I mean, that’s a lot of water- more than enough to keep you alive long enough for help to arrive.

Consider the fact that the average human drinks between 1-3 liters of water per day, and you’ll come to appreciate just how long it can help you survive. For peace of mind, know that the Department of Soil, Water, and Environmental Science has shown how the LifeStraw can actually handle up to 1,500 liters of water. Competing models on the market don’t stand a chance (they hover around 75 liters each).

Let's have a look at how this water filter stands up against some of the more prominent pathogens found in unfiltered water:

These numbers suggest that you won’t have to worry about becoming infection by a pathogen when drinking from an untested water source. Overall, the effectiveness of this filter is worth way more than you’ll actually pay for it.

It’s also about $20 on Amazon (here, in case you prefer shopping on Amazon), which is an amazing deal. Granted, a couple of competing models are cheaper, but they’re nowhere close to the LifeStraw in regards to portability, durability, and filtering ability - in other words, it's not necessarily apples to apples.

Ok, now I want to spend a few minutes talking about its close cousin- the Go Water Bottle.

The bottle can hold 670 milliliters of water, and comes with the filter already integrated into the bottle. Basically, this allows you to scoop up water on-the-go and sip straight from your water bottle. For some people, this is better than having to crouch down to a pond or stream and sip through the "straw" device itself.

It’s not that much more expensive than its predecessor. Costing roughly between $35-$45 for one, you’ll get amazing value for your dollar. One thing I did notice on the Amazon listing however, is that it seemed more expensive to buy a 2-pack versus the single bottle. That may change, but be aware that as of this writing (Updated June 2019), that this was the case. Anyway, no LifeStraw review would be complete without mentioning the Go Water Bottle.

There are a bunch of other water bottle filters out there, and we're looking at those as well. 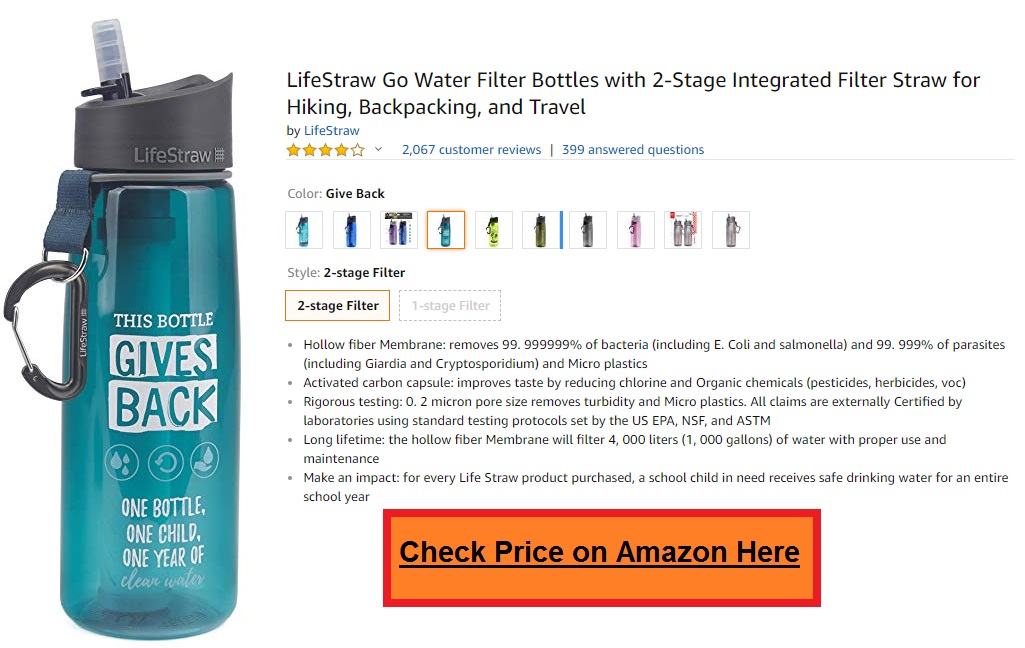 Of course the LifeStraw is only one of dozens, if not more, options for you when you need emergency water filtration. Here at TruthSurvival, we're going to show you more. Because, one thing I do know: While this particular design is perfect for an emergency bug-out bag or the ULTRA light-weight hiker who just doesn't want to carry a full blown filter system, if you're like 98% of other backpackers (or someone who wants a filter with more capacity and that doesn't require you to get down on your knees to sip the water from the source, you might want to keep some other pieces of equipment on hand.

I totally get that. So, with that in mind, we're looking at a few other ones as well.

Check out the review we've got for Sagan Life's Water Filter Systems here. In that review, we cover the XTreme Straw (yes, another straw system, but with a few additional features), the Journey, AquaBrick and AquaDrum.

Also, we take an in-depth look at the Grayl Water Bottles here as well as some of the other mainstream systems.

Finally, LifeStraw now has competition - and it's pretty tough to beat. If you are looking for a cleanable filtration straw design, and are willing to spend another $5 or so, check out our Survivor Filter Pro review - we talk about the Survivor Straw there.

To recap, the LifeStraw is one of the most efficient water filters you can buy for emergency use and as something you can just more-or-less toss into your glove compartment or go bag and not need to think about it - until you do! You’ll love just how small, lightweight, and portable it actually is. Due to its small size, you can fit it in your pocket or any compartment in your backpack. It has the ability to filter up to 1,000 liters of water, as well as remove 99.999% of bacteria and protozoan parasites.

It doesn’t require moving parts, pumps, or chemicals, and is simple enough for even an absolute beginner to use. And if you’ve got the extra funds, be sure to invest in the LifeStraw’s cousin, the Go Water Bottle.

It will allow you to filter water on-the-go, which is an awesome survival benefit. Thanks for reading!

Check out the LifeStraw at SurvivalFrog Now!
SaveSavedRemoved 0

Best Emergency Food and Why

Check out the Award-Winning Survivor Filter GRAYL Filters 99.99% of the NASTIES from Water Sagan Life has a LOT of Filtration Options and Other Gear

Epic Water Filters Also Have Systems for the Home!